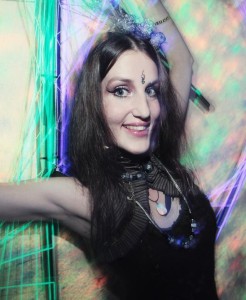 Thanks to dance, I stopped dreaming my life and started living my dream. And how did it begin?

In 2006 I went to a metal music festival „Brutal Assault“ and I saw a concert of Israeli band „Orphaned Land“ there. Apart from electric guitars and drum set they play also traditional Middle Eastern instruments. I was absolutely fascinated and danced to their music like crazy! But as days went by, I wanted to know how to dance to Middle Eastern music properly.

In October 2006 I found a belly dance course advertisement on our university notice board and that´s how I found my first belly dance teacher, Alice Janstova from Prague. She was very friendly, motivating and absoulutely amazing at explaining the movements. I attended her course from October 2006 to June 2009.

From July 2008 to March 2013 I attended courses of Eglal from Prague. She teaches Raqs Sharqi, various Arabic folk dance styles (Baladi, Shaabi, Saidi, Khaleegy, Hagalla…), dance with props (veil, sword, finger cymbals…), fusion of Ballet and Raqs Sharqi… and organizes Orient Connection festival and also many belly dance haflas in Prague. Thanks to her, I started performing regularly both as a solo dancer (my own choreographies) and as a member of her group „Belly Ballet“ (former „Orient Connection“ group). I was a member of Eglal´s dance group in years 2009 – 2013.

In years 2010 – 2013 I was a member of „Yalla Raqs“ dance group which is focused mainly on Arabic folk dance (Shaabi, Saidi, Hagalla…) and dance with props (fan veils, swords…) We met in Eglal´s dance courses, formed a group and created our own choreographies. Yalla Raqs´ s main choreographer is Petra Satine Cifkova.

From September 2008 to June 2010 I attended Iranian, Afghan and Uzbek dance course led by Rena Milgrom from Prague. Thanks to her, I got to know Sufism and Persian poetry (Jalaluddin Balkhi Rumi, Fariduddin Attar, Hafez Shirazi…) which is very close to my heart and is a wonderful source of inspiration for my dance.

From October 2010 to March 2015 I attended American Tribal Style and Tribal Fusion course led by Martina Viewegova from Prague. From December 2013 to March 2015 I was a member of Martina´s dance group „Tamawi“ which is focused on group improvisation similar to ATS and ITS (as we say, „Prague Tribal Style“ ☺). Tamawi group dances mainly with swords.

13th December 2015 I passed the exam to be a dance teacher. The teachers´training lasted from 19th Septermber 2015 till 13th December 2015 in Prague in „Centrum tance“ dance studio. The course is certified by Ministry of Education, Youth and Sports of the Czech Republic. 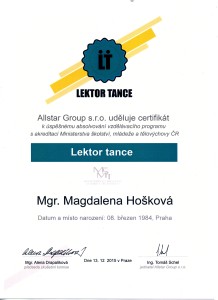 And why am I enchanted by Tribal Fusion? Because Tribal Fusion dancers move like something between a woman, an animal, a goddess, a demon and a robot. I also love the fact that one has so much freedom in mixing various dance styles together. In my choreographies and improvisations I mix Tribal Fusion with elements of Flamenco, Persian dance, Butoh, Chinese peacock dance, Contemporary Dance, Ballet, Dancehall… I´m enthusiastic about getting to know various kinds of dance and weaving them into my own style. I enjoy creating stories (science fiction, horror stories, fictional mythology…) and telling them through my dance. I call this style of mine „Gothic and Industrial Storytelling Fusion Dance“ 🙂

At the end of 2013, my husband and I created a duo “Angelzone” – he composes electronic music (IDM/Trip hop) and I dance to it. I enjoy also dancing to my husband´s solo music project “Kamenny Kvitek” (ambient/noise). For me, noise and industrial music is similar to the mythical chaos which is full of creativity, so order and the world can be born from it.

In January 2016, I joined „Isizwana“ dance group. We dance ATS according to FatChanceBellyDance. 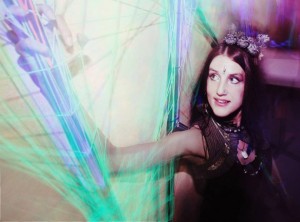 There were many of them, so this is just an excerpt…